• TRAVEL can be a noun or a verb. As a noun, travel refers to movement from place to place, especially abroad, rather than a specific journey.Ex: Travel is said to broaden the mind, but many find long business trips tiring.“Travel” is uncountable, and is often used in terms such as “air travel” and “business travel”. “Travel” has a plural form, but this is only used in a literary sense to mean many long, exotic trips.Ex: He is off on his travels again.Note that is BE, the verb forms are spelt “travelled” and “travelling”. In AE, the equivalents are spelt “traveled” and “traveling”. 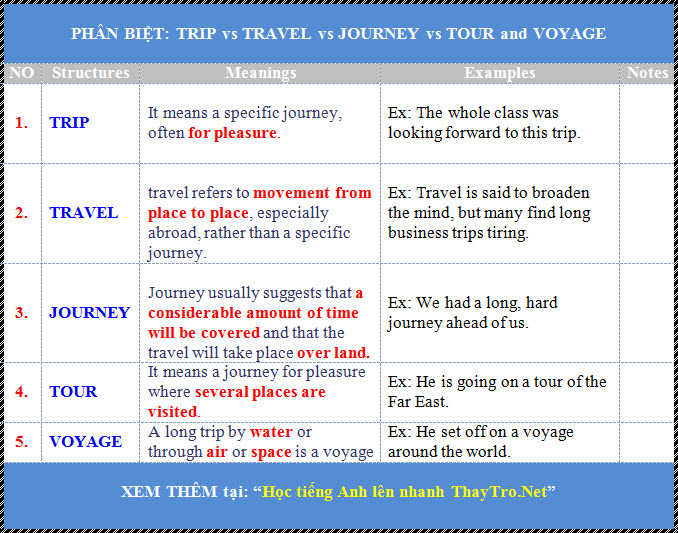 • JOURNEY is a noun. It means the act of traveling from one place to another. (Journey usually suggests that a considerable amount of time will be covered and that the travel will take place over land.)Ex: We had a long, hard journey ahead of us.A journey may be short, if it is taken regularlyEx: He only had a fifteen-minute journey to work.In AE, “trip” may be used in this sense.• TRIP is a noun. It means a specific journey, often for pleasure. (A trip may be either long or short, for business or pleasure, and taken either at a rushed or a leisurely pace.)Ex: The whole class was looking forward to this trip.A “business trip” is a journey with a commercial objective.• TOUR can be both a noun and a verb. It means a journey for pleasure where several places are visited.Ex: He is going on a tour of the Far East.“Tour” can be used in the context of sport and entertainment, to refer to a route taken around a country or countries in order to perform in several places.Ex: The Royal Ballet’s tour of Europe was a great success.• VOYAGE is a noun. A long trip by water or through air or space is a voyage.Ex: He set off on a voyage around the world.“Voyage” often has literary associations. A more common word in everyday English is “journey”. * Nguồn: sưu tâm
* Bạn có thể tham khảo thêm ở clip hướng dẫn sau: