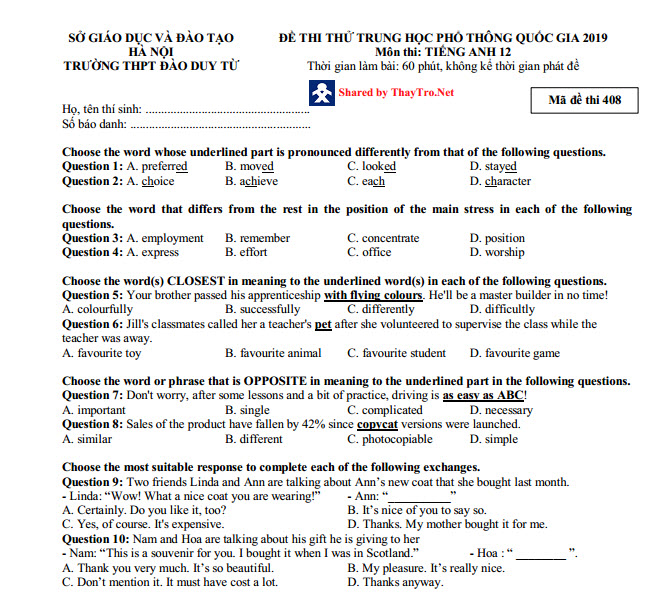 Choose the word(s) CLOSEST in meaning to the underlined word(s) in each of the following questions.

Question 5: Your brother passed his apprenticeship with flying colours. He'll be a master builder in no time!

Question 6: Jill's classmates called her a teacher's pet after she volunteered to supervise the class while the teacher was away.

Choose the word or phrase that is OPPOSITE in meaning to the underlined part in the following questions.

Question 7: Don't worry, after some lessons and a bit of practice, driving is as easy as ABC!

Question 8: Sales of the product have fallen by 42% since copycat versions were launched.

Question 11: When [A] GCSEs are taken' in secondary school, they can often combined [B] with [C] other qualifications [D], or diplomas.

Question 12: Chemical engineering [A] is based on [B] the principles of [C] physics, chemists [D], and mathematics.

Question 13: Some bacteria [A] are extremely harmful [B], but others are regular used [C] in producing foods. [D]

Choose the sentence that is closest in meaning to each of the following questions.

Question 26: The teacher didn’t let us leave the room before we finished the essay.

A. After we had finished the essay, we left the room.

B. We were not allowed to leave the room before we finished the essay.

C. The teacher allowed us leave the room until we finished the essay

D. We were let leaving the room until the essay was finished.

Question 27: A bank clerk was cashing my cheque when the robbers entered the bank.

A. I was having my cheque cashed when the robbers entered the bank.

B. A bank clerk was having my cheque when the robbers entered the bank.

C. The robbers entered the bank when I was cashing my cheque.

D. The robbers were having a bank clerk cashed my cheque when they entered the bank

A. It was not Steve who stole the money.

B. Steve is thought to have stolen the money.

C. Many people think the money is stolen by Steve.

D. The money is thought to be stolen by Steve.