Read the following passage and mark the letter A, B, C, or D on your answer sheet to indicate the correct answer to each of the questions from 31 to 35.

Our lives are full of cardboard. The packaging of certain things we buy, from food products to electrical goods, is made of cardboard. In the UK, over 8 million tons of the stuff is produced every year just for packing. It makes the things we buy more expensive, too. On average, 16 % of the money we spend on a product is for the packaging. And where does the packaging usually end up? In the bin, of course, but hopefully that’s the recycling bin not the rubbish bin.

Recycling cardboard is much more efficient than producing it in the first place. It takes 24% less energy and produces 50 % less sulphur dioxide to recycle it. Recycled cardboard has some remarkable uses, too. Obviously, it ends up as a building material. It isn’t as expensive as traditional materials and it is often more accessible. Some innovative and environmentally friendly designers are actually using it to make furniture and buildings.

One such person is Japanese architect Shigeru Ban, who designed wonderful emergency shelters made of cardboard tubes. The first people to use these were the survivors of the appalling earthquake in Kobe, Japan, in 1995. Since then, they have been used in other places around the word after terrible natural disasters. Perhaps Ban’s most outstanding design is his cardboard cathedral in Christchurch, New Zealand. His modern, eco- friendly cathedral for up to 700 people is a temporary replacement for the ancient cathedral that was damaged in the earthquake in February 2011.

(Adapted from “Achievers B” by Helen Halliwell)

Question 31: Which could be the best title of the passage?

A. Cardboard – A Traditional Building Material     B. The future of Packaging in the UK

Question 34: According to the passage, recycled cardboard can be used for _______.

Question 35: Which of the following is TRUE about cardboard buildings as stated in the passage?

A. They were constructed in Japan and New Zealand only.

B. They can serve as permanent homes for people.

C. They are shelters for people after natural disasters.

D. They can house just a small number of people.

Read the following passage and mark the letter A, B, C, or D on your answer sheet to indicate the correct answer to each of the questions from 35 to 42.

What was, just a few days ago, the object of eager speculation among British children has become a reality. Schools are shut. For an unspecified period, learning will take place at home, except for a minority of pupils who are deemed to be vulnerable, or whose parents are key workers. Closing school was a necessary step that should have been taken sooner, as it was in other countries. Across the world, school is part of the rhythm of the life – for parents and teaches as well as pupils. Because of corona virus, an estimated 800 million children globally are now having their education interrupted.

Some may welcome this, at least at first. Nobody wants to catch Covid-19, or be responsible for spreading it. With British schooling in preparation for primary school SATs, GCSEs and A-levels, lessons can be more like drills than investigations. Some parents have already begun sharing plans (and jokes) about homeschooling. However, most parents will feel less well equipped to teach older children.

The social impact of being separated from peers also varies for different age groups. Almost all children, including some who find school difficult, benefit from the social experiences that it offers. But for teenagers, whose emotional development requires them to become more separate from their parents and careers, being forced back into the family nest carries particular stresses.

But economic inequality will be the biggest variable between the experiences of British children over the next few months. In any society, school is a leveller. When they are there, pupils share the same spaces, lesson, menus and teachers. At home, children of well-off parents invariably live in bigger houses, are more likely to have their own bedrooms, two parents rather than one to support them, and better access to technology as well as books and other learning resources, and food.

We must do our best over the coming months, and no one should begrudge those who are looking forward to lessons or weekday lunches with their children. But during this particular period, the government should do everything in its power to ensure that more vulnerable children and families do not lose out. When things get back to normal, anyone who have fallen behind must be helped to catch up.

Question 36: Which is the most suitable title for the passage?

A. Life without School: Not a Level Playing Field

B. Homeschooling: You’ve Missed the Boat

C. Life at School: No Pain No Gain

D. In Praise Of Homeschooling

Question 38: According to paragraph 2, why does the idea of school closure seem appealing at first?

A. Because lessons at school have become unnecessary

B. Because most students haven’t been well-prepared for the coming exams

C. Because parents hope to have more time with their children

D. Because people are unwilling to put their well-being at risk

Question 41: According to passage, which of the following would best facilitate homeschooling?

Question 42: Which statement is TRUE, according to the passage?

A. British schools are considering closure on account of Covid-19.

B. Children whose parents work in important industries are more vulnerable.

C. In any particular school, children have equal access to learning resources.

D. Modern parents believe they are in a good position to teach their offspring. 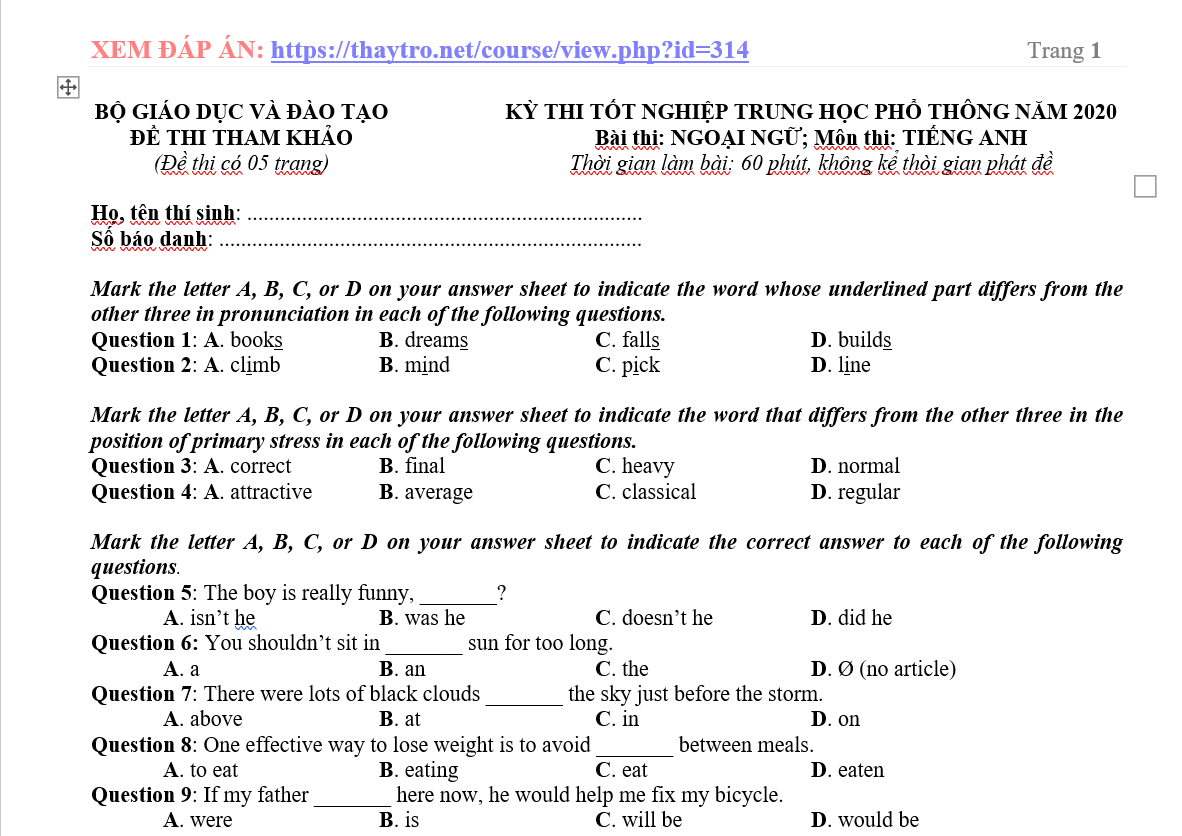