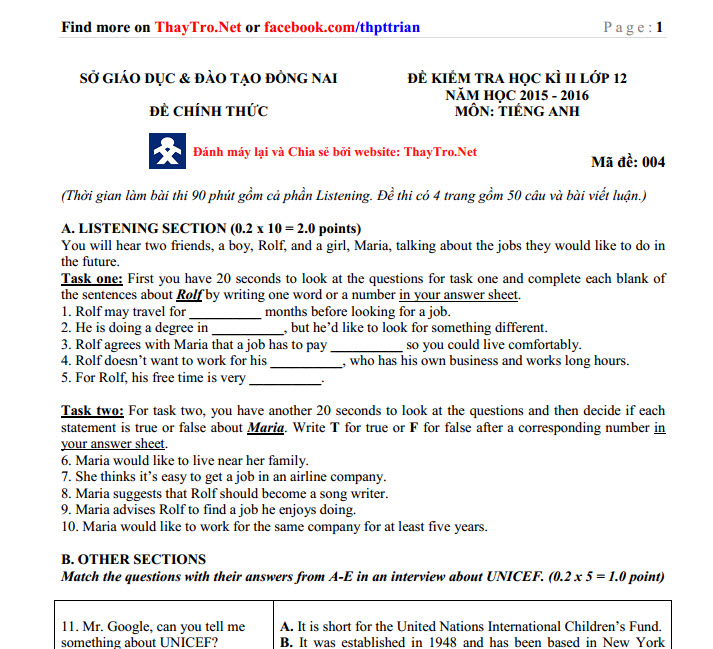 Read the extract carefully and complete each blank with an appropriate word. (0.2 x 5 = 1.0 point)

Few people now question the reality of global warming and its effects on the world’s climate. Many scientists blame the increase in the world’s temperature for recent natural disasters and are convinced that, more than ever before, the Earth is at (16) ___ from the forces of the wind, rain and sun. According to scientists, global warming is making extreme weather events, (17) ___ hurricanes and droughts, even more severe and causing sea levels all around the world to rise.

Environmental groups are putting (18) ___ on governments to take action to reduce the amount of carbon dioxide which is given off by factories and power plants, thus attacking the problem at its source. Environmentalists are in favor of more money being (19) ___ on research into solar, wind and wave energy devices.

Some scientists, (20) ___, believe that even if we stopped releasing carbon dioxide and other gases into the atmosphere tomorrow, we would have to wait several hundred years to notice the results.

A friend once boasted to me that she had seen the film The Sound of Music no fewer than 17 times. Can you believe it? Personally, I cannot imagine a greater waste of one’s time, usually once is enough for me, but I have to confess there are such films that I, too, have watched on multiple occasions without ever growing tired of them. Indeed, some films have benefited from a second viewing, in exactly the same way that one’s enjoyment of a novel can improve on the second, third or fourth reading. It often feels like a different experience.

And a recent study has shown that it actually is different. It is true that rereading books, watching films again, or revisiting places where you have been happy, results in a “new or renewed appreciation” of the experience. The study says that doing something again enables people not only to relive the past pleasant experience, but also to discover more exciting new details. It is likely that when you relive a book or a movie, you find out more about it for another purpose, with a refined taste, from a new viewpoint or with a different experience. All these elements shed a new light on the second reading or have a greater effect on the recurrent viewing. “Therefore, the experience is different, even though it is repeated” the research concludes. “By doing it again, people get more out of it.”

41. What is the best title for the article?

42. As stated in paragraph 1, the writer agrees that the second reading of some novels may give you ___.

43. Which of the following is closest in meaning to “multiple” in line 3?

45. What elements may make the second reading or viewing a more exciting experience?